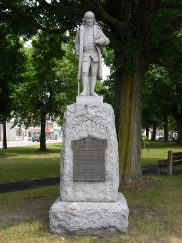 With easy trail access, the little town of Weissport has several claims to fame. First, it’s a great access point for the D&L Trail. Here you can easily slip onto the restored towpath and bike, hike, cross-country ski or fish to your heart’s content. The trail extends north to Jim Thorpe (about 4 miles) and south to Parryville (about 3 miles).

Second, the village sits on the site of the original Fort Allen, which was constructed by Benjamin Franklin and his men in January 1756 in response to a series of Indian attacks. The fort’s original well is a local landmark. Third, Weissport served as a major building site for many of the boats used on the canal. The Lehigh Canal’s 1829 opening greatly influenced the town’s early development, and boat construction began here as early as the 1830s.  Nestled between the Lehigh Canal and River, Weissport has withstood its share of floods over the years. Despite the damaging high waters, many buildings from the early days have survived. So have the tracks for the old Central Railroad of New Jersey, which ran parallel to the canal. The line is still used today as part of the Norfolk Southern Railroad.

Located in Carbon County, the 2,972-acre Beltzville State Park is developed around the U.S. Army Corps of Engineers flood control project - Beltzville Dam. Beltzville Lake is 949 acres with a shoreline of 19.8 miles. The park is located along... More