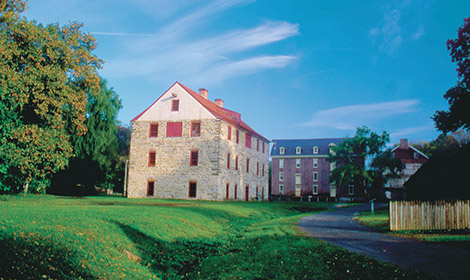 Bethlehem is Lehigh Valley’s oldest city.
It was named on Christmas Eve, 1741, by a group of Moravians who relocated from North Carolina and settled at the confluence of the Lehigh River and Monocacy Creek. While the Moravians constructed some water-powered mills on the Monocacy, it was the canal, railroads, and resulting economic opportunities that lured large-scale industry to the south bank of the Lehigh River. The largest industrial force, Bethlehem Iron Co., soon dominated the town’s economy and way of life. Workers milled and forged steel made from local iron, coal, and limestone, helping to launch the Industrial Revolution in the late 1800s.

Bethlehem has six distinct National Historic Districts within its boundaries, as well as two National Historic landmarks. Many of its original structures built by early settlers still line the streets of the downtown historic district.

Today, Bethlehem’s art community flourishes, which attracts art lovers of all kinds. Musikfest offers a week-long event that draws thousands to experience live performances. Celtic Classic recognizes the presence of Bethlehem’s Celtic culture, while Christkindlmarkt brings visitors and residents a taste of Germany. Main Street in Bethlehem is an art form in itself. The care and maintenance of its historic past has been preserved to a pristine, inviting, and invigorating destination.

D&L Trail Friendly Business There is no better place to gear up for all your running needs than Aardvark Sports Shop.  Located a half mile off the D&L Trail in historic downtown Bethlehem, Aardvark has helped local runners since 1984.  From... More

The Banana Factory, a community arts center and gallery, recognizes the importance of the visual arts and has dedicated itself to promoting and sharing them with everyone, regardless of age, race or economic background. From gallery exhibitions by nationally-known artists... More

Burnside Plantation is an 18th century Moravian farm that today is a living history museum. The Plantation demonstrates farming methods between 1748 and 1848, a time of great change in agriculture. Learn what life was like on a Moravian farm... More

The Governor Wolf Historical Society was founded in February of 1958 after the Wolf Academy Restoration Society and Bath Area Historical Society merged under the presidency of Elias W. Spengler.  The Society is active in preserving the Lehigh Valley's rich... More

In 1752, an apothecary  was built in the center of Moravian Church country, a Protestant denomination. The Moravian Museum of Bethlehem stands on the site of this house of medicine. See a fascinating exhibit including a set of apothecary jars... More

A Smithsonian Institution-affiliate, the National Museum of Industrial History is dedicated to forging a connection between America’s industrial past and the innovations of today by educating the public and inspiring the visionaries of tomorrow. Housed in the 100-year-old former Bethlehem... More

SteelStacks is a ten-acre campus dedicated to arts, culture, family events, community celebrations, education, and fun. Once the home plant of Bethlehem Steel, the second largest steel manufacturer in the nation, the site has been reborn through music and art,... More