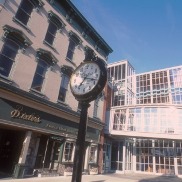 Located at what the Lenni Lenape Indians knew as the “Forks of the Delaware,” the city of Easton sits on the banks where the Lehigh and Delaware rivers merge – as it has since the mid-1700s when the frontier town was laid out by William Penn.

Like other cities designed by Penn, the town’s focal point was, and still is, a large central square. The first public reading of the Declaration of Independence outside of Philadelphia took place in Eason’s Centre Square in 1776.

The best place to begin a journey into Easton’s past is Centre Square, where you will find the Crayola Experience and the oldest continually running open-air Farmer’s Market in the United States–just two blocks south of U.S. 22. Other attractions include historic walking tours, concert and theater productions performed by nationally acclaimed stars, horse-drawn carriage rides and plenty of art galleries nestled within the confines of Easton’s history.

Forks of the Delaware Trailhead

The 1753 Bachmann Publick House contains the last remaining Northampton County colonial era courtroom that has been restored to its colonial era appearance. Located at the northeast corner of Second and Northampton Streets, the Bachmann is Easton’s oldest building. It... More

College Hill area is in the city of Easton, Northampton County, Pennsylvania at Lafayette College.

Pennsylvania’s only mule-drawn canal boat ride cruises Section 8 of the Lehigh Canal in Hugh Moore Park during the summer. The authentically-dressed crew will guide you through the story of the anthracite canals and the people who worked and lived on... More

The National Canal Museum, an affiliate of the Delaware & Lehigh National Heritage Corridor, is the only museum in the country dedicated to telling the story of America’s historic towpath canals. Take a voyage on the  Josiah White II canal... More

The Sigal Museum is Northampton County, Pennsylvania’s leading institution of local history, and home to significant collections of pre-European settlement artifacts, decorative arts and textiles, farming implements and colonial furniture.  The Museum opened in summer of 2010, offering its visitors... More

Want to roam through a crayon and marker factory, explore the magic of light and color, and experiment with cool art techniques? It's all under one roof at our family discovery center in Easton, Pennsylvania. Hands-on activities for all ages.... More