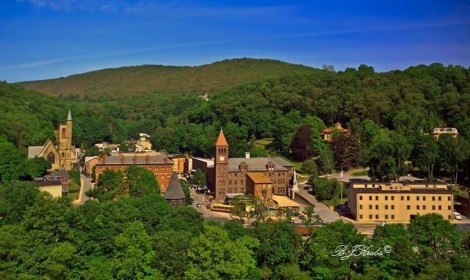 Established in 1818 as Mauch Chunk, the town was later named Jim Thorpe after the legendary Native American athlete. Here, entrepreneurs led by Josiah White formed the Lehigh Coal & Navigation Company in the 1820s, and shipped countless tons of anthracite coal and other goods to market via the Lehigh and Delaware Canals. The town grew in importance when it was named Carbon County’s seat in 1843.

Its steep hillsides, narrow streets, and terraced gardens earned the town its nickname “The Switzerland of America.” The beauty of this region has beckoned people for almost two centuries. Today, the restored Old Mauch Chunk Railroad Station in the center of the town offers visitor services and train rides into Lehigh Gorge. The Mauch Chunk Opera House presents live theater and music. Visit the home of Asa Packer, founder of Lehigh University. Tour the Old Carbon County Jail, once occupied by the Molly Maguires – the alleged Irish mining organization seeking better working conditions.

In 1912, Mary Packer Cummings willed her family's home and all its contents to the Borough of Mauch Chunk where it would remain as a memorial to her father and his accomplishments. At that time, the Borough was not sure... More

A Butterfly Sanctuary with live indoor aviary and nature-based gift shop. Tours are available at Bear Mountain as well as educational programs and butterfly releases. It is also available for parties and special events. Enjoy the ultimate butterfly experience! Website

Carbon County (population 56,846) was created on March 13, 1843, from parts of Northampton and Monroe counties. Its name alludes to its deposits of anthracite coal. Jim Thorpe, the county seat, was originally incorporated on January 26, 1850, as the... More

Perched high atop Packer Hill, the Harry Packer Mansion sits like a sentinel overlooking the town. The mansion’s impressive facade could have been taken from a gothic novel. In fact, the Mansion was used as the model for Disney World’s... More

The 4,548-acre park follows the Lehigh River from the U.S. Army Corps of Engineers' Francis E. Walter Dam to the north, to Jim Thorpe at the southern end. It is a designated state scenic river and the lure for many... More

Located on the outskirts of Historic Jim Thorpe, this County Park is perfect for that family getaway. While at the park you can enjoy  the 2.8 mile Mauch Chunk Lake, walk or bike the renovated 16-mile Switchback Gravity Railroad and... More

Wander the Old Jail's cold hallways, past Cell 17 with its mysterious handprint on the wall, under the gallows on which seven of the accused Molly Maguires were put to death, and down into the eerie dungeon. Contains 72 rooms... More

Built in 1888 to serve booming passenger train activity, and listed on the National Register of Historic Places, the Landing is Carbon County's hub for special events, exhibits and rail excursions. It serves as an orientation center of the Delaware... More

D&L Trail Friendly Business Ride with us through the beautiful Lehigh River Gorge, our most popular biking daytrip. You can rent one of our Trek bicycles by the hour or for the entire day.  This easy, downhill, trail provides traffic-free riding... More

There’s something fun here at Pocono Whitewater, Biking and Skirmish for every level of adventurer! Choose your own pace…we have mild to wild dam release whitewater and family style whitewater rafting trips, over 30 miles of scenic, easy downhill rail-trail biking excursions along... More

This recreation rail-trail links Jim Thorpe and Summit Hill and features a fantastic overlook on Mount Pisgah. Highlights include interpretive panels that depict what it was like to ride the historic Switchback Gravity Railroad, an old mine shaft, as well... More

The Jim Thorpe eXperience, or JTX, offers guided adventures and historic/cultural tours as pre-packaged half-day to all-day outings for people who are visiting the area. Adventures include hiking, biking, kayaking, walking and snowshoeing, and most tours include a visit to... More

The Museum is housed in the former St. Paul's Methodist Church building in the Jim Thorpe Historic District. Constructed in 1843 of red brick with high ornate ceiling, the church is a magnificent example of Victorian ecclesiastical architecture. Mauch Chunk... More