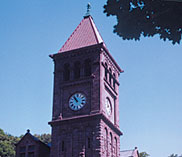 Carbon County (population 56,846) was created on March 13, 1843, from parts of Northampton and Monroe counties. Its name alludes to its deposits of anthracite coal. Jim Thorpe, the county seat, was originally incorporated on January 26, 1850, as the borough of Mauch Chunk, an Indian name meaning “bear mountain.” It was renamed in 1954 for the famous Indian athlete who was buried there.