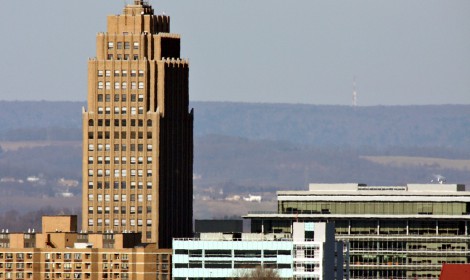 In 1762, William Allen – Chief Justice of Colonial Pennsylvania’s Supreme Court, former mayor of Philadelphia and successful businessman – drew up plans for a rural village known as Northamptontown. Folks didn’t care for the lengthy, formal name so they called it “Allen’s Town.” In 1838, the city officially adopted the name Allentown.

Allentown is a thriving metropolis with roots in the iron industry. In 1829, Allentown expanded from a small village of Pennsylvania Dutch farmers and tradesmen to a major area of commerce. When the Lehigh Canal opened, many canal workers made their homes here. In the 1830s-40s, the Lehigh Valley gave birth to America’s industrial revolution. Coupled with the Lehigh Canal and the later railroads , Allentown finally achieved the commercial success William Allen envisioned.

Today, the Allentown Art Museum is one of the city’s main attractions. The museum offers exhibitions of notable artists such as Frank Lloyd Wright, Andy Warhol, Flemish and Barocci, among many others. Visitors can also tour the Museum of Indian Culture, which honors the legacy of native Lenni Lenape people. Begin each year with a drive through Lights in the Parkway, a symbol of community spirit that draws hundreds of thousands of visitors. Allentown’s Canal Park is nearby, providing easy access to the D&L Trail, plus opportunities for hiking, biking, jogging, fishing and access to the waterways for paddlers.

The 1803 House serves as a living classroom for the community at large. Through scheduled tours and various special events throughout the year, children and adults can obtain a glimpse into the lifestyle of the inhabitants of colonial Emmaus. The... More

America on Wheels celebrates the history of over-the-road transportation and highlights future means of moving people and products. The museum showcases the nation’s transportation systems from its roots, including carriages, bicycles, motorcycles, automobiles and trucks, to the latest in transportation... More

The history of Bogert’s bridge dates back to the mid-1700s when the Bogert family moved into a log cabin next to the future site of the bridge. Dating back to 1841, and spanning 145 feet over Little Lehigh River, it... More

The Da Vinci Science Center believes that every young person, like Leonardo, is insatiably curious about the world around him or her, uses multiple modes of investigation, embraces creativity, and seeks to make connections among all things surrounding him or... More

The Lehigh County Commissioners bought Haines Mill in 1972 and it was restored as working grist mill museum. As part of Lehigh County’s park system, visitors can watch a water turbine and rolling equipment operated by water power supplied from... More

This 9.2-mile loop and extension passes through Whitehall, Coplay, and North Whitehall. It eventually will be connected to the D&L Trail. Part of the 5.5-mile loop is paved, with the remainder made up of fine gravel and millings. Along the trail... More

This 540 acre park is owned by the Pennsylvania Fish and Boat Commission and in part by Lehigh County. The 117-acre lake provides fishing from boats or shore, and a 4 mile trail around the lake provides beautiful views and nature... More

Located in a stunning new building adjacent to Trout Hall, the Lehigh Valley Heritage Center is host to permanent and changing exhibits on Lehigh Valley history and it houses the library and offices of the Lehigh County Historical Society. Here... More

The British were about to seize Philadelphia in 1777. It was feared that the King’s Army would destroy the great bell in Independence Hall that symbolized the American Republic, so the bell was removed and taken to Allentown, and hidden... More

The 77.5-acre Pool Wildlife Sanctuary headquarters Wildlands Conservancy's main office and the Air Products Environmental Education Center. Its place in our history is thanks to the vision of Air Products founder, Leonard Parker Pool, who bequeathed the sanctuary to the... More