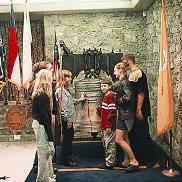 The British were about to seize Philadelphia in 1777. It was feared that the King’s Army would destroy the great bell in Independence Hall that symbolized the American Republic, so the bell was removed and taken to Allentown, and hidden for nearly a year in the Zion Reformed Church. Today an impressive memorial stands where the Liberty Bell was safely kept.