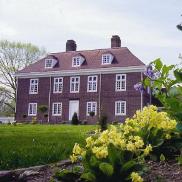 Named for Robert Morris, financier of the American Revolution, the town of Morrisville is located at the falls of the Delaware River across from Trenton. The town has strong economical and historical ties to both Trenton and Philadelphia.

One-half mile from the Falls of the Delaware River, nobleman Thomas Barclay’s 1765 Georgian mansion known as Summerseat once served as Washington’s headquarters. Declaration of Independence and Constitution signers Robert Morris (“Financier of the Revolution”) and George Clymer were subsequent owners of this National Historic Site.

The home of William Penn, known as Pennsbury Manor, was lost to posterity through neglect, but has been restored. Painstaking research went into its restoration. Today, the prim-fronted, three-storied, brick manor-house stands once more. Built on the original foundations, it remains on the point of land formed by the Delaware River between Morrisville and Bristol.

At this southern end of the D&L Trail, the canal departs from its course paralleling the river and heads to Bristol.

Mansions Along the Delaware

Visit the country estates of Andalusia, Glen Foerd, Pennsbury Manor and Grundy Mansion (available upon request). An elegant bus tour with step on guide, dressed in period costume, will accompany you on your journey as you tour three centuries of... More

The construction of the original manor was an expression of Penn's belief that life in the country was more wholesome than in the worldly atmosphere of crowded cities. Pennsbury Manor is filled with the spirit of this kindly, devout humanitarian,... More

Summerseat is perhaps most famous for being the Headquarters of General George Washington from December 8th to 14th, 1776. Summerseat was built in the 1770s for Thomas Barclay, a Philadelphia merchant, and acquired by Clymer in 1806. The two-story brick and stone... More